When it comes to Acer’s Predator series, there is nothing you could do that would beat the quality of the device. And, the Predator Helios 300 is a living example of the same. The device, which was initially introduced in 2017, was recently upgraded with a few tweaks and improved functions to further improve the gameplay of the device in the long run.

Although the design and construction of the device haven’t undergone a lot of changes from its predecessor, we can surely say that Acer has managed to upgrade the functions and performance of the gaming laptop.

In case you are planning on purchasing this device, we’d recommend you check through till the end of the article to get a better understanding of every aspect of this device.

An initial look at the Acer Predator Helios 300 PH315-53-71HN will give you old-school vibes, much like how the 2020 version looked like. So, if you were expecting drastic changes to the design and construction of this device, you are already setting yourself up for disappointment.

However, there have been a few new tweaks to the design, especially when it comes to the port placement. The power supply connector has been moved to the left of the device instead of the center of the back, reducing the inconvenience it brought along.

The device has further been designed with additional ventilation openings to ensure maximum air circulation to prevent risks of overheating, which is fairly common in gaming laptops. The HDMI and Display ports have been shifted to different spots from the previous ones.

Instead of relying on the USB Gen-1 type port, the new device is integrated with a new USB Type-C 3.2 Gen-2 port for faster data and file transfer than before. Overall, the new version of the Predator Helios 300 is a little bulkier compared to the previous version.

Despite the slight increase in the weight, Acer hasn’t compromised on the quality and sturdiness of the device, all thanks to the aluminum construction, both on the inside and out. The panel-lit Predator logo on the top gives the device a premium look along with the rougher black plastic on the inside.

The keyboard has a full-size layout with a softer and comfortable typing experience, which you are going to enjoy typing on. Also, the 4-zone LED backlight gives this a further premium look and feel to the device.

Moving onto the display, there aren’t many changes. The device is equipped with a 15.6” display panel with a 144Hz refresh rate. The variant features a full HD display with a matte finish and a non-touch display.

The DeltaE color accuracy and 72%+ AdobeRGB coverage make it a decent candidate for everyday usage without anything out of the box.

However, we’d have to mention that the calibration out of the box is quite disappointing, especially with the upped White point and Gamma. However, you can adjust them according to your needs, so that’s good.

This is likely the part the readers have been waiting to read through. Well, much like its predecessor, even the Predator Helios 300 PH315-53-71HN doesn’t disappoint either.

The device is powered by the latest 10th Generation Intel Core i7-10750H 6-Core Processor with the overclockable NVIDIA GeForce RTX 3060 GPU with 6GB VRAM for an unmatched graphics user interface.

The Intel’s Comet Lake processors that are found in the device aren’t necessarily the latest that you can find in the market, however that doesn’t affect the performance and productivity you’d expect from the device at all.

The updated Intel platform in this gaming laptop further supports the DDR4 memory but is limited to just 16GB, which is slightly disappointing. The overclocking settings in the laptop are a little different than the previous device in the range.

The Turbo mode in the device enables the users to experience uninterrupted gameplay with reduced temperatures and heightened efficiency like no other.

The preinstalled Predator Sense software in the device allows you to adjust the fan control and other basic settings depending on the kind of gameplay that you induce in the device.

The overall computing power of the device is good, ensuring that you don’t have to compromise on the performance and the system power in the long run.

Activating the dual-channel mode in the device enables you to charge the performance of the device to the next level, which again is pretty amazing.

Coming round to the storage of the device, the Predator Helios 300 PH315-53-71HN comes with up to 512GB SSD for super-fast storage and uninterrupted booting experience while you are enjoying some of your favorite graphics-intensive user experience like no other.

Compared to the 2020 Helios 300, even this upgrade version has the same kind of thermal design. The only changes are the additional air-intake grills on the interior, placed right above the keyboard.

In general, the placement of two fans, four radiators and three heat pipes makes up for your productivity without causing any further risks of overheating.

Another major contributing factor to the performance of the device is battery life. The Predator Helios 300 PH315-53-71HN provides runtimes of up to 5 hours on average, which isn’t necessarily the best in the market but does get the job done for basic user experience.

The 58Wh battery is durable and of good quality, so you wouldn’t have to worry about affecting its durability with consistent usage and charging.

It is also integrated with the best wireless connectivity options, thanks to the 802.11ax and Bluetooth 5.0 availability. It runs on the Windows 10 Home or the Windows 10 Pro operating system. 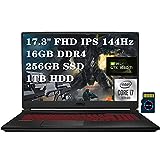 2020 MSI GL75 Leopard Gaming Laptop I 17.3" FHD IPS 144Hz 3ms 100%...
Buy on Amazon
Laptop Funda is a participant in the Amazon Services LLC Associates Program, an affiliate advertising program which helps us earn small commission when you buy a product from our affiliate link.

What are you looking for?